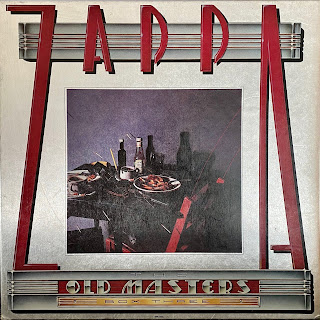 What a legendary era of FZ (and George Duke!), kicking off with Waka/Jawaka's "Big Swifty," a monster tune with one of the most idiosyncratic FZ melodies ever put to tape, and finishing up on Zoot Allures with Terry Bozzio and a song about Disco doody. Sums up the mid-70's, I guess. FZ was still mostly punching upward with his politically lyric savagery, and growing by leaps and bounds as a guitarist, mile after mile from Blessed Relief to Black Napkins. And but also, there's Over-Nite Sensation and Apostrophe, two of Zappa's most enduring albums, Roxy, his most legendary live recording (which is saying a lot for a guy who recorded everything), and One Size Fits All, the greatest album ever recorded by a Greek-Arab Sicilian-American guitar player from Baltimore. It's true!

Now, the eons are closing on the three FZ Old Masters box sets. There's still the Old Masters Sampler, which I'll post soon. You should certainly check out the current crop of 2012 Zappa remasters, especially the all-analog 180g vinyl editions. They are spectacular. Then you should compare them to these and the other two boxes I've posted because Music is The Best.

A fantastic gift! Thank you so much!

thanks for this box...Jawaka and Bongo among my alltime choices, best to you...